Public Education For All: Will It Just Be A Dream?

Progress is only made possible through education. You can learn everything you need in order to succeed in life in the four corners of the classroom. With rapid globalization, other countries are doubling their efforts in educating their youth especially that it is now common for workers of different nationalities to compete for the same job. You don’t usually have to worry about it during elementary and secondary years as citizens can still get public education especially if you live in America. Regardless of the many issues, we face today, we still remain to be one of the most progressive and powerful nations in the world. However, the youth and their families still struggle in sending their kids to college and in the university. The tuition fee is outrageously high and you can easily fall deep into debt with student loans before you even graduate with a degree you can be proud of. 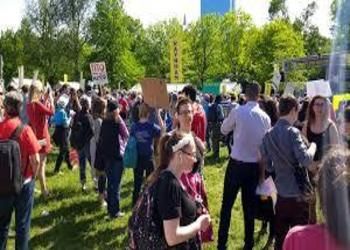 It is such a shame that no matter how rich the US is, the American government still can’t afford to educate its youth for free when it can very well send all sorts of aid to other nations all year round. That is the problem raised by many parents and teachers right now. Apart from that, the existing educational system prevents teachers from realizing their fullest potential as educators because of conflicting policies that tie their effectiveness as teachers to school funding. Students and their parents are so obsessed in passing standardized tests that determine who is doing well at school and qualifies them to enroll in specific universities when these tests do not fully evaluate a student’s potential, what they have learned at school, and how well they will do later in life. Some can afford to pay for reviews and put their kids in private school so they have an edge over other students on these tests.

The ultimate dream of public education is incredibly simple. Students, ideally, would go to a classroom, receive top-notch instruction from a passionate, well-informed teacher, would work hard in their class, and would come away with a new set of skills, talents, interests, and capabilities. Over the past few decades in the United States, a number of education reforms have been enacted, designed to measure and improve student learning outcomes, holding teachers accountable for their students' performances. Despite these well-intentioned programs, including No Child Left Behind, Race To The Top, and the Every Student Succeeds Act, public education is more broken than ever. The reason, as much as we hate to admit it, is that we've disobeyed the cardinal rule of success in any industry: treating your workers like professionals.

Once a student enters their college years, they realize how what public education in their formative years lacks and puts them at a disadvantage among their more affluent peers. It also is a struggle to pay the high tuition fee itself not to mention the long list of books that do not come in cheap too. School supplies aren’t even included and then there is the dreaded concern about how to pay for costly housing since most students often come from out-of-state or live farther away from the school. You have to face all these issues all at once, which can be a big hurdle for many in completing their education when everywhere around them, there are financial constraints that prevent them from realizing their dream of getting a degree.

Is the U.S. educational system beginning to decay?

I don’t like to be alarmist, or give too much weight to any one test result, but last week’s release of 2016 reading test scores around the world is now the third major proof point that something is awry. The latest Progress in International Reading Literacy Study (PIRLS) — a reading comprehension test given to fourth graders in 58 countries and regions around the world — showed that U.S. performance is sliding in both absolute and relative terms. American fourth-graders, on average, had worse reading skills than they did five years earlier, in 2011, with scores slipping seven points on a 1,000-point scale. At the same time, other countries leapfrogged ahead of us. The combination meant that the United States slipped from 6th to 15th place in this international ranking.

There is always the option to enroll younger kids in public schools but it all changes when they grow up. However, there is also proof that shows public education to be not that great of a preparation for students for real life after school. A lot of students scored poorly in many basic skills like math and reading comprehension that used to be the competitive edge of most Americans. The US economy is also partly to blame for this performance decline as many parents now no longer have the time to check up on their children and ask how they are doing at school when they are too busy working to provide for all their family’s needs. There are problems in various school districts throughout the country and it needs to be seriously looked at by the higher-ups before we continue to lose ground on our edge in the global workplace, which is definitely what we are preparing the youth for in schools.

The following blog post Public Education For All: Will It Just Be A Dream? was originally published on The PodBlaze.com Blog

Public Education For All: Will It Just Be A Dream?

Progress is only made possible through education. You can learn everything you need in order to succeed in life in the four corners of the c...